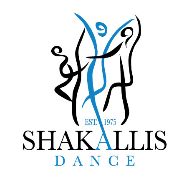 Shakallis Dance School (SDS) was founded in 1975 by the dancer, instructor and choreographer Mr. Mikis Shakallis. Throughout the years the school expanded having today 5 studios around Nicosia teaching all desciplines of dance. The hard work, dedication and continious education of its staff has made SDS one of the best and well-respected schools in Cyprus.

The school teaches a variety of different types of dance at all levels ranging from beginners’ to advanced masterclasses. A large number of students register here at the school every year, in order to attend classes according to their individual needs and preferences.

The school caters for the demands of the students who wish to follow a career in dance, down to the ones who only wish to attend classes for pure pleasure or just as a hobby. The dance instructors are very highly trained and qualified in order for the school to secure the highest levels of training.

Many of the students continue a professional career in dance, either as dancers themselves or as dance instructors, although a large number of students that graduate continue their studies abroad at dance schools.

Our School serves your dancing needs, for 45 years, and promises to be here for the next decades and serve your children and grandchildren!

A carefully selected number of qualified associates comprise the great SDS teaching team at our dance school. All of them have been part of the school for decades as students, and have been trained for years as assistants before taking up full teaching duties.

The experience, knowledge, dedication and passion are just a few of the qualities of our team. Many of them have certificates and diplomas from International Dance Associations, having successfully completed a series of seminars and examinations. They also hold strong academic qualifications in other disciplines and have extensive and varied work experience in the market place, making them well-rounded individuals with highly-developed communication, presentation & teaching skills.

Every year, they all undergo in-house and open seminars to continuously improve, develop and maintain the highest standards set by the dance school.

Grew up in an environment of dance his mother and father put him in dancing art. After graduating School in 1989 and completing his military service in 1991 Christos followed his passion when he decided to study dance. He received his Performing Art Diploma when he graduated in 1993 from the London Studio Center. After the completion of his diploma Christos continues his studies in dancing to this day, and is now an Instructor de Baile 2 of the Spanish Dance Society (SDS), a fellow in Latin & Freestyle branch of the International Dance Teachers association (IDTA) and among a few who hold the salsa dance diploma (IDTA).

In 1995 Christos joined the family business as a teacher at the “Shakallis Dance School” and gradually became a choreographer of numerous performances in local festivals, TV dance performances and school shows. Since 2000, he undertook the role of the General Manager of the School and expanded even the suburbs of Nicosia, introducing at the same time other activities such as weekly dance parties (the biggest Latin parties in Cyprus). He teaches Latin, Freestyle, Greek, Club dance, Flamenco and Cyprus traditional dance at various levels.

For the past 20 years he has been the official Choreographer and teacher at the institutes of the University of Cyprus (1997-2009), Cyprus College-European University (1995-present), Intercollege-University of Nicosia (2000-2006) and Cyprus Police Academy (2003-2006) after being offered the position and with great success. Their dance groups give at the least two performances each year while such of these represent Cyprus in Festivals abroad under his supervision.

His awards, achievements and performances are many. Among others, he came first in Latin American Dances in Athens in 1995; he performed twice at the Salsa UK Congress in 2004 and 2005 respectively. He also performed at the World Congress on Dance Research in 2005, he was the judge at TV talent shows and national dance competitions and last but not least he performed at the Eurovision Song contest in 2008 representing Cyprus. Christos counts many performances with the folkloric group “Adouloti Shakalli” all over the world including USA, Canada, China, South Africa and Europe. He has also appeared on TV both locally and internationally on channels like the BBC, Canadian TV, Spanish TV and Greek TV just to name a few.
Lately he has being spreading Zorba and Zeibekiko around the world with seminars and showcases and he has choreographed for Guinness world record attempts Zorba, Zeibekiko, and Cypriot folkloric dances.

Christos is the founder and an active member of “Salsa Cyprus” who introduced the Cyprus salsa Congress and the 15th event will take place in 2020.Also a founder member of Cyprus Tango Meeting event with the 6th Tango meeting taking place on late 2019.He is a member of the Pancyprian Association of Dance Teachers and currently and has served as President of the IDTA Cyprus branch for 8 years. He is also a member of the Cyprus federation of social and sport dance (C.F.S.S.D).

Elena Shakalli was born in Athens in 1974. Coming from a dancing family, Elena literally grew up spending more time in the dance school than home from her very early years, having unquestionably inherited her parents’ talent and passion for dance. This led her to follow a career in dance, worthily growing the dance school along with her brother.

In 2013 she choreographed a musical/theatrical performance for the Refugee Folkloric Society, “Adouloti Shakalli”, in honour of the founder of the group, Mikis Shakallis, her father, who passed away on 12th October 2012. The script, written by the well-known and respected director Kyros Rossides, was based on her father’s biography with more than 80 dancers taking part, 2 orchestras and professional actors. The play aimed to commemorate respect for Mikis Shakallis who was an innovator of the dance scene in Cyprus since the 1970s. All five shows were sold out and all the net proceeds were given to the institution ‘I embrace’ that supports poor families in Cyprus.

In 2015 another successful performance took place, celebrating the 40 years of the dance school with an innovative script by Kyros Rossides and choreography by Elena Shakalli.

Since 2000 Elena gives seminars in Cyprus, Greece, England, Israel, Lebanon, Turkey and other parts of the world, for different styles of dancing.

“Behind every successful man, there is always a powerful woman”. Maro Shakalli is no exception! Born in Karavas in 1949, dancing was part of her life from her teenage years.

Together with late Mikis Shakallis, they had formed a dance group focusing on the tradition by teaching and performing folklore as well as Greek dances. After the 1974 invasion, they established the well-known Shakallis Dance School in the free part of Nicosia, starting from a small shop space, to now having multiple studio rooms in 5 locations.

Maro has been teaching tirelessly for over four decades, 3 generations of all ages. Her strong qualities are the inner power and enthusiasm that she pours into her hard work. Her patience, team spirit and sincere love for all her students keeps the school united and a strong leader in this industry.

During her lifetime dance career, Maro has performed in countless festivals, events, TV shows, competitions, in Cyprus and across the globe, with numerous accreditations and prizes won. Being a lead dancer in the early years, she has shown the way for hundreds of dancers to become professionals in the field.

Both Maro and her husband, successfully passed on the knowledge and dance spirit to their 2 children and 4 grandchildren. She proudly now enjoys the continuation of all the hard work, being aside and actively supportive with her valuable know-how and advices wherever required.

We use cookies to ensure that we give you the best experience on our website. If you continue to use this site we will assume that you are happy with it.Ok